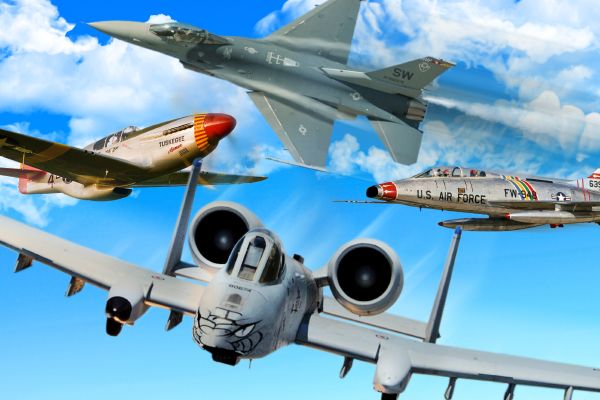 A truly amazing collection of modern and classic aircraft will take to the skies at the same time to honor the 122nd Fighter Wing of Fort Wayne. The F-100, P-51, F-16 and A-10 will grace the skies together, as each plane has represented the 122nd at different points over the years. This will be an inspiring sight to behold.

The F-100 brings the speed and sound of fighter aircraft that the crowd craves. The North American F-100 Super Sabre was an American supersonic jet fighter aircraft that served with the United States Air Force (USAF) from 1954 to 1971 and with the Air National Guard (ANG) until 1979. The first of the Century Series of USAF jet fighters, it was the first USAF fighter capable of supersonic speed in level flight.

The North American Aviation P-51 Mustang is an American made long-range, single-seat, fighter aircraft primarily engaged in service during World War II. The aircraft was designed and built by North American Aviation. The first Mustangs were used by the Royal Air Force as tactical-reconnaissance aircraft and fighter bombers. Toward the end of 1943, P-51Bs were employed by the U.S. Air Force as bomber escorts in air raids over Germany and as fighter-bombers by allied forces. The P-51 was also in service with Allied air forces in the North Africa, the Mediterranean, Italy, and Japan.

The F-16 Fighting Falcon is a compact, multi-role fighter aircraft. It is highly maneuverable and has proven itself in air-to-air combat and air-to-surface attack. It provides a relatively low-cost, high-performance weapon system for the United States and allied nations. In an air combat role, the F-16's maneuverability and combat radius exceed that of all potential threat fighter aircraft. It can locate targets in all weather conditions and detect low flying aircraft in radar ground clutter. In an air-to-surface role, the F-16 can fly more than 500 miles, deliver its weapons with superior accuracy, defend itself against enemy aircraft, and return to its starting point. An all-weather capability allows it to accurately deliver ordnance during non-visual bombing conditions.

The A-10 Thunderbolt II is perhaps best known for the 30mm gatling gun mounted on the nose. The gun is designed to fire armor-piercing depleted uranium and high-explosive incendiary rounds. The A-10 has excellent maneuverability at low air speeds and altitude, and it is a highly accurate and survivable weapons-delivery platform. The aircraft can loiter near battle areas for long periods of time and operate in low ceiling and visibility conditions. The wide combat radius and short takeoff and landing capability permit operations in and out of locations near front lines.