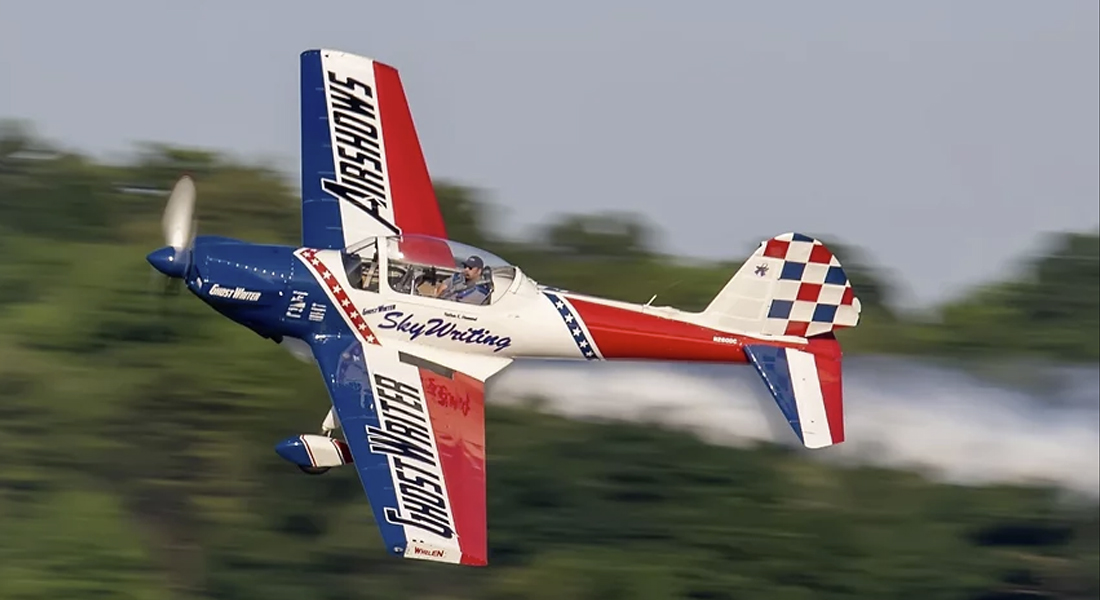 Originally designed as a trainer for the Royal Canadian Air Force, our 1956 deHavilland Chipmunk has been specially modified for Airshow aerobatics and Skywriting. Nearly 3,000 man-hours over a two year period were spent on developing the GhostWriter into the finest example of a Super Chipmunk. It now boasts a cruising speed of 150mph, and a range of more than 500 miles. It will climb at a rate of 2,500 feet per minute, with a ceiling of 17,500 feet.

If you recognize the airplane, that's no surprise. GhostWriter developed a well established career in the Airshow and Skywriting industry as the Pepsi SkyDancer for 25 years. In 2016 Nathan K. Hammond took the controls and has been captivating audiences with the smooth lines and raw horsepower of the unparalleled Super Chipmunk ever since.

Nathan Hammond joined SkyDancer Airshows in 1998, quickly learning the techniques and nuances of Skywriting and Airshow flying. Today, Nathan flies the Super Chipmunk, the GhostWriter, in both daytime and nighttime airshows; as well as skywriting across the nation. The passion of flying was instilled into Nathan from his earliest days. Born and raised in Rhinebeck, New York; the airplanes and airshows of Old Rhinebeck Aerodrome started his flying career. Soloing an airplane at age 16, earning his pilot’s license at 17; Nathan has logged over 7,000 hours flight time, from 1917 Curtiss Jenny’s to Cessna Citations. Along with being a Commercial rated pilot, he also maintains an Airframe and Power Plant Mechanics License.