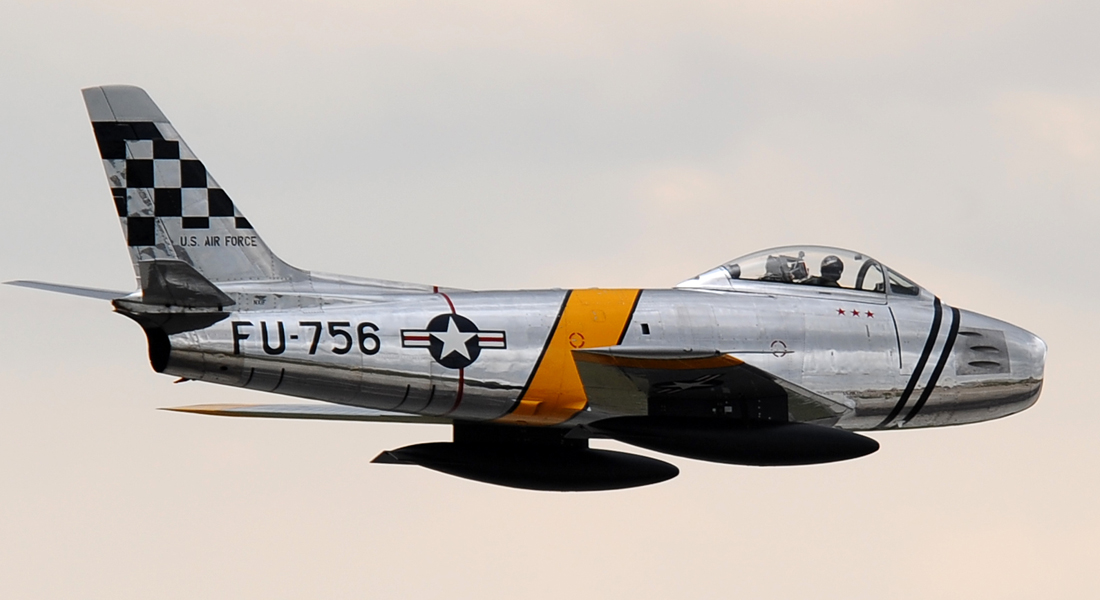 The North American F-86 Sabre, sometimes called the Sabrejet, is a transonic jet fighter aircraft. Produced by North American Aviation, the Sabre is best known as the United States' first swept wing fighter that could counter the swept-wing Soviet MiG-15 in high-speed dogfights in the skies of the Korean War (1950–1953), fighting some of the earliest jet-to-jet battles in history. Considered one of the best and most important fighter aircraft in that war, the F-86 is also rated highly in comparison with fighters of other eras. Although it was developed in the late 1940s and was outdated by the end of the 1950s, the Sabre proved versatile and adaptable and continued as a front-line fighter in numerous air forces until the last active operational examples were retired by the Bolivian Air Force in 1994.

Its success led to an extended production run of more than 7,800 aircraft between 1949 and 1956, in the United States, Japan, and Italy. Variants were built in Canada and Australia. The Canadair Sabre added another 1,815 airframes, and the significantly redesigned CAC Sabre (sometimes known as the Avon Sabre or CAC CA-27), had a production run of 112. The Sabre is by far the most-produced Western jet fighter, with total production of all variants at 9,860 units.

The F-86 entered service with the United States Air Force in 1949, joining the 1st Fighter Wing's 94th Fighter Squadron and became the primary air-to-air jet fighter used by the Americans in the Korean War. While earlier straight-winged jets such as the F-80 and F-84 initially achieved air victories, when the swept wing Soviet MiG-15 was introduced in November 1950, it outperformed all UN-based aircraft. In response, three squadrons of F-86s were rushed to the Far East in December. Early variants of the F-86 could not outturn, but they could out dive the MiG-15, although the MiG-15 was superior to the early F-86 models in ceiling, acceleration, rate of climb and zoom. With the introduction of the F-86F in 1953, the two aircraft were more closely matched, with many combat-experienced pilots claiming a marginal superiority for the F-86F.