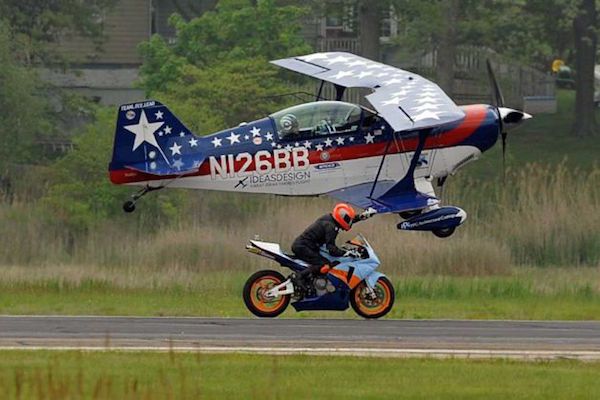 Brothers Billy and David Werth have taken sibling rivalry to a new high, literally. With Billy flying his Pitts S-2C acrobatically, brother David will race him on his motorcycle and will even attempt to grab the wing and tail of the aircraft as it flies inverted alongside him.

Growing up in an Air Force family, Billy has been around some sort of airplane his whole life. He started flying in 1988 and graduated with a Bachelor's Degree in Professional Aviation Technology from Indiana State University in 1994. In 1992 he started teaching aerobatics and has been hooked ever since. In 1997 he graduated from Undergraduate Pilot Training and started flying the KC-135R for the Air Force Reserves. He was hired by Chautauqua Airlines in 2001 and is now a Captain on the Embraer 145, based in Indianapolis. Billy has over 6000 hours of flight time in 20 different aircraft, with 600 of it teaching folks how to fly upside down.

David is Billy’s younger brother and is no stranger to airplanes or adventure. He attended college at the Art Institute of Fort Lauderdale in Florida and graduated with a degree in Advertising Design in 1993. After working for several years in print design he ventured out on his own and opened his own company, IDEAS Design, Inc. in 1997. In addition to running his busy web design company, now located in Albuquerque, NM and fulfilling his marketing director duties for Grayout Aerosports he manages to make time for his thrill seeking hobbies; snowboarding, mountain biking, motorcycle racing, and the latest adventure… stunt racing his motorcycle up against his big brother Billy on the runway. With his creative style and perpetual enthusiasm David fits in perfectly with the Grayout crew