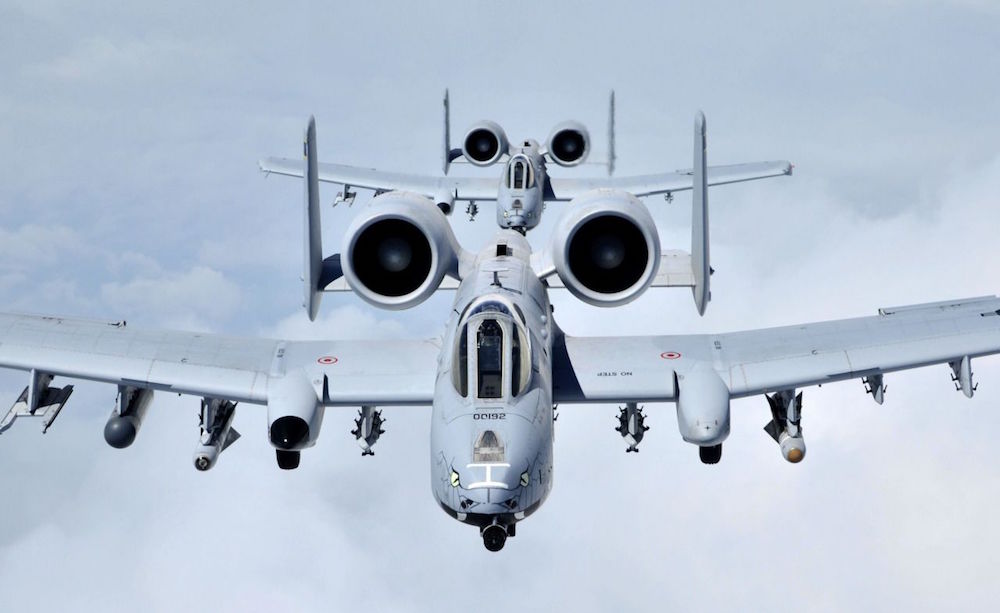 The 122nd Fighter Wing, flies the A-10 Thunderbolt II out of the Fort Wayne Air National Guard Base in Fort Wayne, Indiana. The Fort Wayne International Airport is adjacent to the base and is also known by its original name, Baer Field. Baer Field was named for 1st Lieutenant Paul Baer, a World War I veteran and Fort Wayne native.

The 122nd Fighter Wing traces its heritage back to the 358th Fighter Group that was activated in January, 1943, at Richmond Army Air Base, VA. Flying P-47D "Thunderbolts," the 358th flew interdiction and bomber escort missions from England until D-Day. As the Allies advanced, they took on the role of ground support, including "tank busting."

Following the surrender of Germany, the group redeployed to the United States in July 1945, and were officially inactivated the following November. In May 1946, the group was redesignated as the 122nd Fighter Group (later to become Fighter Wing) and assigned with all honors and colors to the Indiana Air National Guard. During the war the 358th, known as the "Orange Tails" for their distinctive bright orange aircraft markings, was awarded three Distinguished Unit Citations, and the Croix de Guerre.

The base was originally named after Lt. Paul Baer, Fort Wayne native and fighter ace of World War I. Baer began the war as a volunteer in the famed Lafayette Escadrille, a French aviation unit with American pilots. He was the first American aviator to receive the Distinguished Service Cross and is contended to be the first American ace in history. Baer survived the war and returned home as a highly decorated pilot.

With World War II raging in Europe in 1939, President Roosevelt declared a national emergency and began building up the American armed forces. One of the projects was an expanding of the Army Air Corps bases in the United States, and the military looked toward Indiana. Fort Wayne put forth a proposal and, after some haggling, a contract was awarded and the air base began construction in February 1941. The base was nearing completion later in the year when the first fighters arrived from Selfridge Air Base, Michigan on December 6th, 1941. The next day the nation was at war and within a week the squadron was overseas.

Baer Field Army Air Base became a maintenance center for C-47 transports going overseas to the war. In fact, the majority of C-47s used in the invasion of Normandy were fitted in Fort Wayne. During this time, the base was home to thousands of military and civilian personnel and many celebrities played shows for the USO in a hangar that is still standing on the west side of the Fort Wayne International Airport.

Toward the end of the war, the base was turned into a rotation center for Army Air Force troops coming home from the Pacific. The base was formally closed in late 1945 and the last civilians left in 1946.

A year later, President Truman signed the National Security Act of 1947, establishing the Air Force and the Air National Guard. The 122d Fighter-Bomber Wing was re-designated from the 358th Fighter Group, a decorated fighter-bomber unit from the Second World War, and was stationed at Stout Field in Indianapolis. The 163d Fighter-Bomber Squadron was activated and the Wing Headquarters was transferred to Baer Field in Fort Wayne on September 1st, 1954.

Portions of the Wing were activated during the Korean War, but none from Baer Field served overseas. In the early 1960's, the Wing was activated for the Berlin crisis and another portion served in France, but the first time the Wing was activated to serve in a combat zone came in 1991, when the base security police unit deployed to Saudi Arabia; they remained there from January until June of that year.

In the 1990's, the 122nd Fighter Wing became the first unit in the Air Force to receive the night-flying systems that enabled the fighters to be fully mission-capable 24 hours a day.

After September 11th, 2001, along with the multitude of changes for the U.S. military, came new contingencies for the Wing. Immediately units were sent overseas (one of the first American units deployed after 9/11 was the 122nd Fighter Wing.) The war rotations continue up to this day. The Wing serves in the Air Expeditionary Forces deployment rotation, as well as deploying members to augment Air Force and Army units serving at home and abroad.

The 122nd Fighter Wing has contributed multiple combat medical teams, security forces squads, vehicle drivers, pilots who are hand-picked for their outstanding combat flying skills and many individuals who are asked to serve on specialty teams in the Middle East. Combat zone assignments include Afghanistan, Iraq, Oman, Kyrgyzstan, Uzbekistan, Qatar, Diego Garcia, and many, many more areas.